Political Cartoon Of The Year 2013

Please vote in this if you enjoy cartoons. Not for me (I'm just happy to be included), but for your favourite, to show your appreciation for an endangered species... and hopefully have a few laughs into the bargain. An email address is required, but it will NOT be shared or passed on.

Laughter, Even In Rejection... 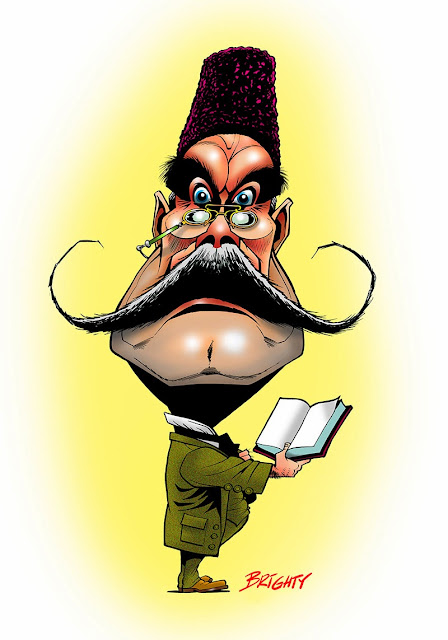 Many of my fellow caricaturists will be aware of the Romanian Caragiale exhibition that has been running for a number of years, whereby caricaturists around the globe have been politely invited to contribute a caricature of the great Romanian writer, Ion Luca Caragiale, later broadened out to include a variety of other Romanian celebs from history. It seemed to capture the imagination of cartoonists worldwide, even though there was no payment for these drawings, only an annual competition, with prestige for awards, more than anything of more tangible value. Hundreds participated, including quite a number from the UK. I was one of them (my original entry, above), and as a diversion from paid work, enjoyed the experience.

Recently, they contacted me again. This was to invite me resubmit new caricatures for their Facebook exhibition. I had a bit of spare time, so rattled of a quick King Carol ll, followed by a rapid Mihai Eminescu, both well received. So much so, that I thought I’d have another stab at Caragiale himself, with his wonderful handlebar moustache.

Trouble is, he’s been drawn so many times that it’s difficult to come up with something a little different. However, I hit upon the idea of combining his image with that of another iconic mustachio’d figure, much loved in Western culture, and set about the task, trying out a new style for me in the process. All very enjoyable. I hit send, and looked forward to seeing my Caragiale joining the growing ranks on the Facebook site.

Next morning, I received an email from the organiser, informing me that my cartoon was “special” (good start), but that he had sent it to his colleagues for their opinion (not necessary with the others), and that he felt Caragiale is a respectable character, and should not be the target of laughing and joking. I immediately responded in my best Romanian (thank you, Google Translate), reassuring him that the character I had ‘mashed’ with Caragiale was not only a much-loved icon in the UK, but also considered to be erudite and wise, hence my choice (along with the big moustache).

However, I received the verdict earlier today, and it was bad news, I'm afraid. Whilst they had enjoyed my latest submission, they felt they could not use it in the exhibition. My disappointment however, was completely quelled by the rather wonderful explanation which followed. This being: “We want to protect the sensibilities of those who haven’t sense of humor. Sponsors have no sense of humor.”.

Love it! I wrote back immediately, thanking him for the humour in his honesty and wishing them all the best.

As for whether the sponsors would be right to be offended, I'll leave that for you to decide… 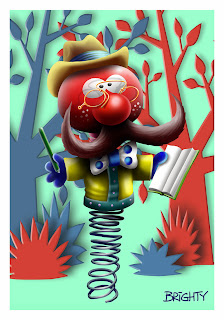 Is It That Time Already?

We're well into June, so it must be time for my second blog post of the year by now.


If anyone is still looking in here, I can only apologise for the lack of bloggage. I know I'm not alone in slacking, with other social networking options seemingly taking their toll on the good ol' blog thing, but I'm not quite ready to abandon it altogether, I think, and may even attempt a bit of a revival... of this one at least.


To that end, and following hard on the heels of four days of Diamond Jubilee celebrations, you may take the following offerings as either an extension to it all, or an antidote - I think they are respectful and disrespectful enough in equal measdure to fall into either camp. As I've stated before on this blog, I've never been a great lover of the institute of Monarchy, but over the decades, I've mellowed somewhat, acknowledging that in terms of value for money and the undoubted revenue generated for the nation from their very existence, the Royal family, and the Queen in particular, are not quite the parasites I may have once painted them (literally) to be. And, in fact, they have all worked tirelessly to provide editorial cartoonists with a generous portion of their living.


For that alone, I pay the following tribute. Most of these are from the mid to late 90s, and my Daily Record days, but I'll start with the most recent from my current tenure in The Sun... (click to enlarge, as they say)... 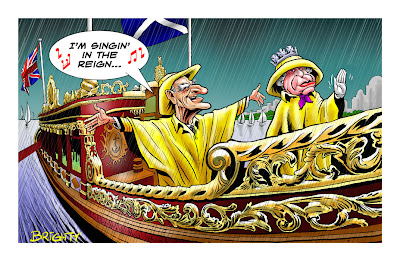 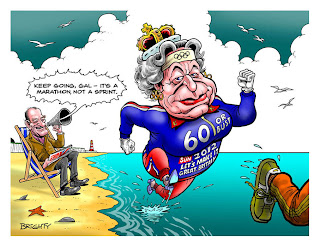 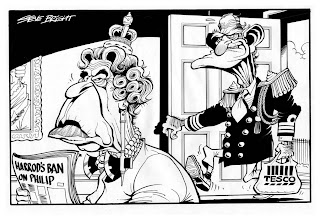 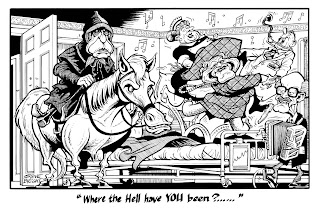 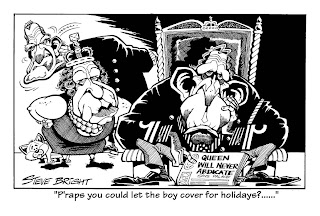 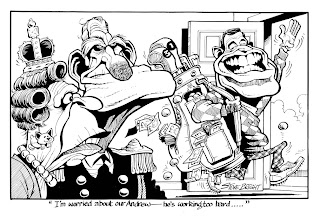 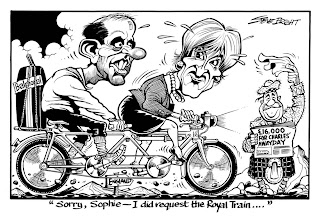 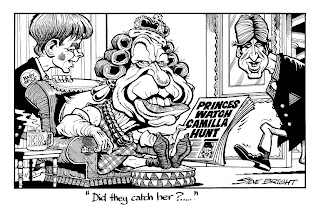 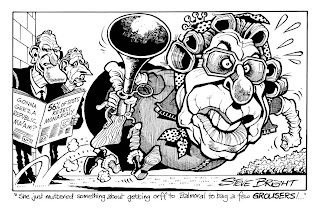 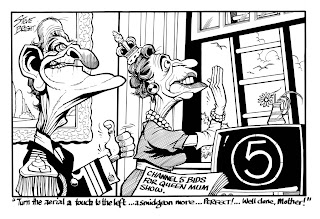 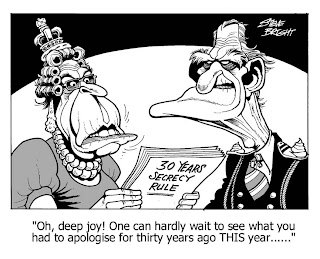 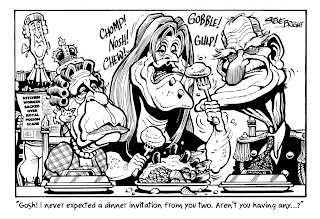 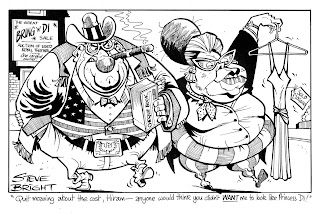 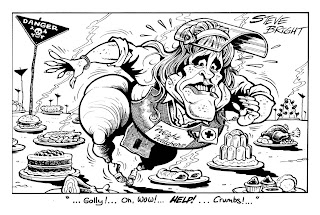 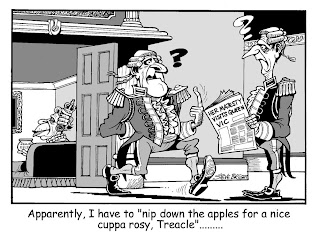 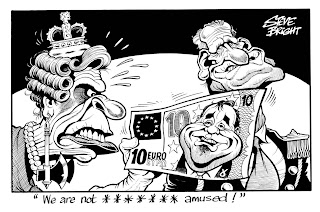 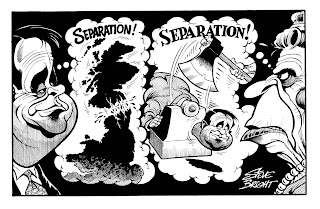 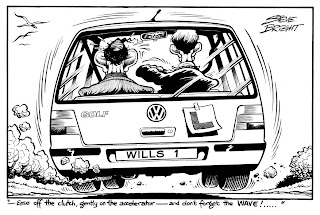 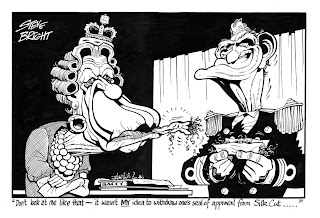 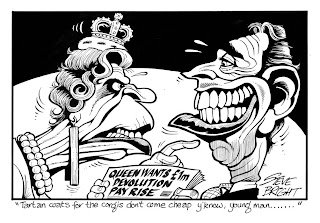 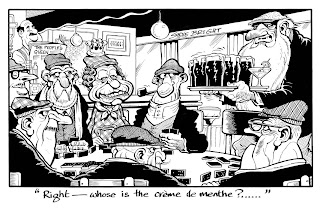 Huge apologies to anyone still habitually visiting this blog. I've neglected it for some time due to... well, too many reasons really. I hope to get back to updating it a bit more often soon, but for now, I want to post a message to go with the long-overdue latest page in the Hairy Steve online comic. It goes like this...

After a seriously long delay, the newest page in the Hairy Steve comic is now up on the site. As ever, we hope you enjoy it.

Below the previous page is an apology and explanation for the slowdown in the project coming to fruition. Unfortunately, the obstacles appear to have increased over the past weeks rather than cleared, and this latest page has taken an eternity to complete as a result. Things definitely look more settled on the horizon, although I don't anticipate being able to return to the page-per-week rate any time in the near future. These pages take me between 2-3 days to turn around, which is obviously a significant chunk of my working week. When we started publishing Hairy Steve online, that working week was far less frenetic than it is now, which was great for the Hairy Steve project, but less great for my family's living standards.

The funding from our backers has been invaluable to get things off the ground, and the monies are firmly in place for the fulfilment of all pledges once the pages are all completed. But they were never intended to be sufficient to fund the entire project. And whilst profit (or breaking even) has never been on the agenda with this, we still have to finance its creation, and that is done through our time and love for the job in hand covering the losses. Other work, properly paid work, has to be a part of that, and lately, thankfully, that has increased significantly, and has to be given priority for the time being. The last thing I want to do at this point, with only a handful of pages remaining, is to rush the project or cut any corners in quality. I hope you'll agree that is not an option.

So the only alternative is continued patience on everyone's part, and I thank you all in anticipation of that. We're edging ever closer to the climax, and although I don't even know how it will all end myself (I've asked Jamie to feed me the script one page at a time), I know it will be worth waiting for, based on everything Jamie has ever written in his life before (no pressure, Mr Smart!). And I want to do that justice, to the best of my own abilities.

Thank you, once again, for your patience.

Having recently uncovered the secret of creating time-lapse videos of work unfolding in Photoshop, many of which I've admired in the past, I thought I'd test it out for myself on my entry to last weekend's Caption Competition. The challenge was the "anything goes" category, on the theme of 'Hair', and once I'd come up with my idea, I turned on the recording software and lost myself in Photoshop, finally completing my cartoon forty minutes later.
The result was then dropped into Windows Live Movie Maker, and speeded up by x16, music and closing credits added, et voila, one animated short, charting the process of a drawn gag from start to finish. And although it subsequently caused a little controversy over the legitimacy of posting an entry to the competition this way, it still managed to poll enough votes to win, for which I was surprised and delighted in equal measure.
I hope you enjoy it. I'll certainly be recording and posting more if you do...
Posted by Brighty at 09:58 5 comments: 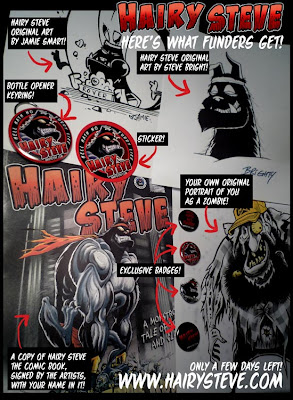 As I write, there is literally only 24 hours left for you to claim any of these great perks by supporting the Hairy Steve Campaign. It's been wonderfully successful and inspiring so far, and I can't quite believe it's already nearing the end, and I'll soon have no more Hairy Steve enthusiasts to 'Zombify'.
The hard work really starts now, with a race to continue bringing you the remaining pages of the comic on schedule. I hope you'll be forgiving and understanding if our target ever falls a little behind - the last thing we want to do is rush things, sacrificing any quality in order to hit self-imposed deadlines. That said, it won't be for want of trying if we have the odd hiccup.
Meanwhile, as I've said, if you'd like to grab yourself any or all of the above, and give us a last-minute push, you have less than one day in which to do it. By the time you next have breakfast, it could be too late. You don't want to have your porridge sprinkled with regrets, do you?
Do you?
(please note - some things in the picture above are approximations. i.e. the comic hasn’t been printed yet, obviously, so this is just a mock version, but everything else is real, three-dimensional, and waiting for you. PLUS, every single contributor gets their name in the comic credits, on the 'Thanks Page'.)
Posted by Brighty at 08:04 No comments: 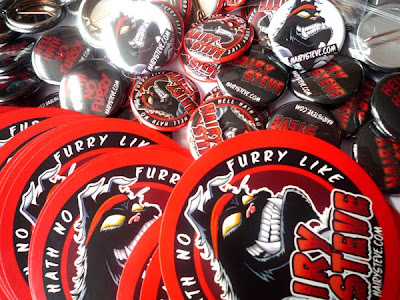 These are so exclusive and hot-footed from Badgeland that not even I have any of them... yet! But we've had them specially made as a thank you for the fabulous support so far for our Hairy Steve campaign , and they will added to the goodies that all funders who have contributed over $20 receive. Jamie's got them all securely stored in his safe right now, and I'm waiting to find out if I have to actually make a donation to the campaign to get mine. He's thinking it over.

Meanwhile, more zombies have escaped from my drawing board, and made their brain-sucking way to the Hairy Steve Gallery. This one will be joining them soon, along with several others. The Army mobilises... 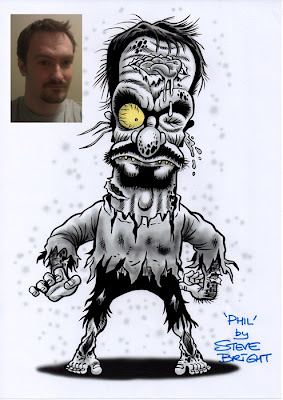 Brighty
'Brighty' is Steve Bright, freelance professional cartoonist/illustrator/writer working throughout the planet and beyond from his UK base, hidden deep within the English countryside. More info shall emerge during the course of this bloggage...